Aleksandr Mitta speaks in Austria about Chagall and Schiele

Some psychoanalysis wouldn’t hurt. To understand better what kind of unconscious makes people in Sigmund Freud’s homeland push all of their matters and cares aside and build up today long queues at the entrance of the Viennese cinema “Burg Kino” before showing of Russian films. Days of Russian Cinema of Gosfilmofond of the Russian Federation ended in Austria.
UNESCO included coffee traditions of Vienna into nonmaterial world culture heritage. Traditions of Gosfilmofond could really claim to enlarge this list in the context of international presentation of film legacy of Russia, which is successfully carried out by the largest film depository in the world despite any sanctions, history turns and alarming forecasts. When the second Film Festival of Russian Cinema in Vienna ended, it became clear, that in Austria Russian films had put right international film emphases. And those were days, when culture affected people’s mood stronger, than economy and politics.

Gosfilmofond managed to do impossible: in a few days to cover a century of our cinema history from 1914 till 2014 and to unite on the screen one country with three names: the Russian Empire, the USSR and the Russian Federation. To present in Vienna a festival not only interesting, but also of the same scale as people, when number of showings and their level doesn’t make people tired or emotionally overloaded, but imprints on their minds and stays their forever. Chronologically the frameworks of Viennese programme “New Russian cinema and film treasures of Gosfilmofond of Russia” covered events from the World War I till our days. With view on the history through the woman’ fate: from adventures of a young woman during the World War I in a pre-revolutionary picture by Mikhail Martov “By Fire and Blood”; to the film “One More Year” of 2014 about the life a modern couple, directed by Oksana Bychkova and themed on a play “With Your Beloved Don’t Part” by Aleksand Volodin. As a matter of fact, a film by Aleksandr Mitta “Chagall-Malevich”, presented in Vienna, tells not only the story of the friendship between two Russian painters, but also about the role of Chagall’s wife in relationships of the genius, the society and the history.
Thus, Vienna, full halls in the cinema “Burg Kino”, the showing of “Chagall-Malevich”, all seats in the stalls have been occupied an hour before, the balcony is packed, there is no place to stand near walls. Director of the picture Aleksandr Mitta is obviously pleased by such disposition. “Marc Chagall loved his wife his entire life”, tells director in response to the request to specify whose role after all is more important in his film. “When she had a bad cold and died unexpectedly overnight, – in life, not in our film, – Chagall came in the morning to her bed and fell on it – there was no melodrama in it – and stayed there for six hours. When he rose, his hair was gray… And after this he couldn’t paint and work for half a year. To play a man, who is worth such love, who create such atmosphere in his family, who is like faithful companion, assistant, like a person, who help her husband in every possible way is a difficult work. In our film actress Kristii Shneider, playing the role of Chagall’s wife, in my point of view, fulfilled the task… But I wanted to draw your attention to the following moment: this year the festival in Vienna has a very interesting selection of films, a real collection of pictures. “Outskirts” by Boris Vasilievich Barnis is a unique work, the start of the thaw in the cinema for a new movement, a picture lacking any kind of ideology, speaking the language of complete truth. During our university years Boris Barnet was really a living god. We glorified him. He was incredibly handsome man, boxer in the past, he had five wives, and these women loved him so much, they formed a club of Boris Barnet’s wives. They assembled, discussed him, and gathered information about him… He was an incredibly amicable, kind person, but a tragic fate befell him. In 1963 “Mosfilm” decided to reorganize itself, and for want of a better response fired Boris Barnet. He was quiet young by our notions – 62 he was then. And he committed suicide, not being able to endure that. And two year later his incredible fame flashed throughout the world, and if he lived he would only put his suitcase with dirty clothes at home, take a new one and traveled all over the world, as every festival wanted to watch his films. And I consider the fact that Vienna brought back one more time his film to be a good cultural step of Gosfilmofond. As well as the showing of “Solaris” by Andrey Tarkovskiy. He was my fellow student, we studied together for five years. While studying everyone was equal, but after the graduation he started to climb higher and higher. But I happened to be neighbors with him in the East Germany back at the times of strict regimes: “Solaris” and my picture “Shine, Shine My Star” were named the two most anticipated films of German youth. It was a pleasure for me to be in the same team with him once more. I could give same hight credites to every film from the Russian programme. Gosfilmofond gathered an awesome collection, I think it is impossible to imagine better, more varied Soviet and Russian cinema. We humbly got in this list. May be undeservedly, but we are proud of this.
P.S. The most popular question to Aleksandr Mitta in Vienna was:”Do you want to direct a film about Austrian painter Kilmt now?” “Klimt is famous without me”, answered director. “But I would gladly do a film about Egon Schiele”.
Irina Korneeva, Rossiyskaya Gazeta 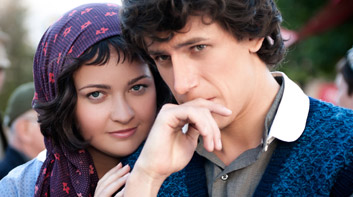 The sold-out “Chagall-Malevich” probably isn’t the best narrative movie in this year’s film festival, but it’s hard to imagine a more delightfully […] 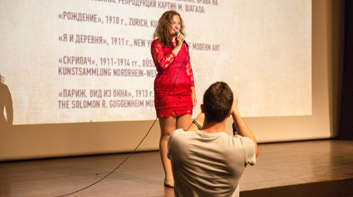 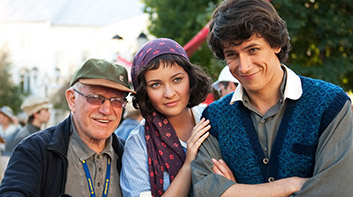