I’ve been on an art kick recently, So, when the opportunity to review Chagall-Malevich came across my desk I didn’t have to wait for Tyler and David’s cigar-chomping lips to bellow my name in unison from the bowels of the editors-in-chief office (yes, in my mind, all editors are facsimiles of J. Jonah Jameson). I jumped at the chance to review it. I am glad I did.

However, for your sake, I will say that it might be best to go into this film exactly as I did, with absolutely no expectations.

If you would like a bit more to go on, I will share my experience with you. Chagall-Malevich is a biopic that follows the budding career of Marc Chagall (portrayed here by Leonid Bichevin), an early 20th century painter. The film’s main focus is Chagall’s brief appointment as Bolshevik Russia’s Commissar of the visual arts. Chagall, a Russian Jew, briefly ran an art school in his hometown of Vitebsk. If you’ve ever seen one of his works of art, you would know that Chagall’s paintings are often bright riots of primary colors. To the filmmakers credit, they have depicted Chagall’s Russian hometown of Vitebsk, where most of the film takes place, in the same unrestrained kaleidoscope of colors, rendering the village and countryside as idyllic as an animated Disney fairytale. Director Alexander Mitta literally brings Chagall’s hyper-real, modernistic paintings to life on screen: couples floats, heads flip, houses turn blue, and horses are depicted in brilliant shades of carmine before the audience’s eyes.

Most of the time, these colorizing and graphic effects are welcome. However, in a few instances, particularly in the beginning of the film, it can be a distraction, as if the scenes were included only to showcase some crazy sight gag. At other times, parts of the screen are tinted different shades from left to right or foreground to background. It has the effect of vignetting the main characters within a scene. The film freely flows between oversaturated colors and more solemn moments where the color is washed away, undersaturated to the point of almost being black and white.

Eventually, the painterly effects blend into the story in a way that further expresses the visions of the artists on screen. At one moment the line is uttered, “A rainbow only appears after a rain” and then there is a quick cut to a rainbow arching gracefully in the sky, only to terminate over the heads of the main characters. If I have a complaint, it’s in the film’s depiction of Chagall. Chagall is portrayed as some sort of Willy Wonka figure, infinitely wise, loving, playful and at times naive. He is shown to have the ability to save a work of art with a single brushstroke and overcome teen depression with a heart-to-heart talk. The reverence the film holds for this historic figure borders on worship. As such, there’s really very little conflict for Chagall. Even the corruption and totalitarian control of Bolshevik Russia can barely touch him. For his wife, Bella Rosenfeld (played captivatingly by Kristii Schneider), things are quite different. At one point in the film, Rosenfeld cautions one of Chagall’s students (and I am paraphrasing here) that two artists should never marry, for in any relationship, one individual is required to keep their feet on the ground while the other is free to traverse the sky

The film centers around an art school. The title would have us think that the story involves the dichotomous relationship between Chagall and the Father of Suprematism, Kasimir Malevich (Anatoly Belyy) However, such could not be further from the case. While Malevich and Chagall are given substantial screen time, using the school setting as a device to allow them to literally state their opposing artistic philosophies, the real conflict here is Chagall and Rosenfeld’s interaction with their childhood-friend-turned-military-Red-Commissar Naum (Semyon Shkalikov). If all of this sounds overly complex, do not be concerned, the film weaves the various stories into one another in a way that feels natural, if a little conventional. I will say that the current subtitles (the film is in Russian), written in white were a bit difficult to read when against a white background. Even in its native Russian and clocking in at just under two hours the film was light and fun, while also presenting a piece of history in a unique and visually captivating way. It could have gotten mired in the atrocities of Marxist-Leninist Russia but instead shows the beauty available in the world even when surrounded by unrest, conflict, and death. 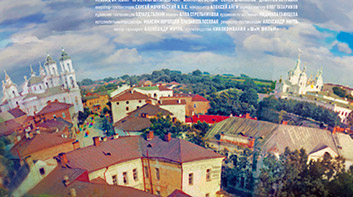 ”Monday, April 27 to Thursday, April 30, 2015. An outstanding selection of films from different genres and languages all with a Jewish […] 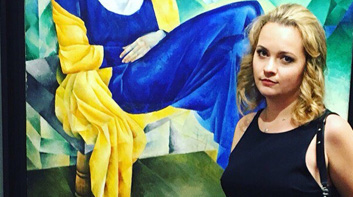 Kristii Schneider at the exhibition “Chagall to Malevich: The Russian Avant-Gardes” in Vienne 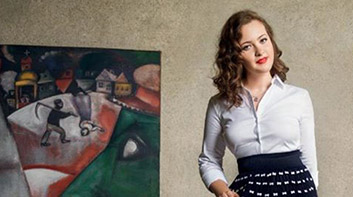