The most creative element in this biographical film is the imaginative use of Chagall-style imagery floating in the sky and suggesting memories of his work. As for the storytelling, it is colorful but pedestrian, full of stilted conversation and cliché- type confrontations. Yet “Chagall-Malevich” is always good to look at, and there is plenty of history involving artists against the background of the Russian revolution and its aftermath.

In the film, directed by Alexander Mitta, young Marc Chagall, portrayed with passion by Leonid Bichevin, after having become known in Paris, returns to his childhood home in Vitebsk, Russia. One reason is to marry his sweetheart, Bella (Kristii Schneider) and the other is to teach and inspire students to create art. He founds an art institute, the Academy of Modern Art, and is determined to instill skill and love for art in talented students.

But there is trouble ahead. Chagall brings artist Kazimir Malevich (Anatolly Belvy) into the school. He has his own passion about favoring abstract painting, and soon, as the film tells us, a movement swirls about him, and students are turning from Chagall to Malevich as the genius to lead the way.

Chagall being Jewish, he is living in the midst of Russian anti-Semitism. Another complication is the attraction Naum, (Semyon Shkalikov), a Soviet commissar, has for Bella. There is plenty of melodrama, the art theory confrontations are volatile and Chagall’s life is in danger.

All is presented in naïve fashion rather than with the depth that would make the movie more sophisticated. But we do learn some basics about the Chagall-Malevich rivalry. And there are those striking works of art. Some 140 paintings were used in the film. A ShiM-Film, LLC release. Reviewed June 12, 2015. 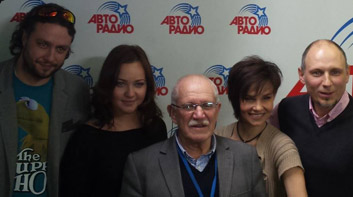 Kristii Schneider and director of “Chagall – Malevich” Aleksandr Mitta were invited to morning show at the Auto-radio. “It was very fun! […] 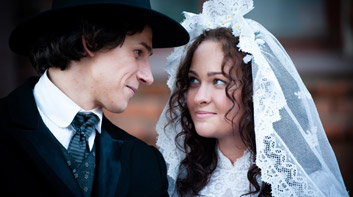 “Chagall-Malevich” was shown at the Nikitskaya Jewish Cultural Center today. 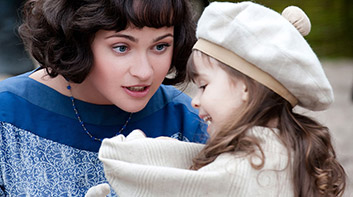 Only wisdom of Bella directs her to make the right choice: debutant Kristii Schneider embodies the type of femininity that inspired Chagall […]