In 1942, Marc Chagall became one of the last Jewish refugees ferried to safety by Varian Frye’s clandestine network. However, to survive National Socialism Chagall would first have to survive Soviet Communism. Initially, the post-revolutionary days were a time of opportunity for artists (and Russian Jews had little reason to mourn the Romanovs), but Chagall was never very astute when it came to the macro political forces in play, unlike his rival Kazimir Malevich. Eventually, this will become a problem for him and his beloved wife Bella in Aleksandr Mitta’s Chagall-Malevich (trailer here), which opens this Friday in New York.

Chagall’s Left Bank friends and colleagues all recognized the Russian expat’s talent, but they were a bit puzzled by his unwavering fidelity to his fiancée, Bella Rosenfeld. With his star ascending, Chagall made what he intended to be a brief trip home to Vitebsk, where he would marry Rosenfeld and whisk her back to Paris. The outbreak of WWI scuttled those plans, but at least the wedding still happens, much to the distress of Naum, a rival suitor with socialist sympathies. Instead of Rosenfeld, he will embrace the revolution, returning to Vitebsk as its political commissar.

Despite his resentment, Naum humors Chagall, building his state-sanctioned art school. Thanks to Chagall’s reputation, the Vitebsk academy quickly draws scores of eager students. Space in Chagall’s classes is eagerly sought after, but the rest of the faculty is dismissed as rather sorry substitutes, until the arrival of Malevich. Both politically and artistically ambitious, Malevich champions Suprematism as the quintessentially Soviet art movement. Although the bold colors and geometric shapes impress the school’s mediocre rank-and-file, Malevich still has trouble managing Naum and the local Party apparatus, despite his political acumen.

In all honesty, the events in Vitebsk did not precisely unfold in this fashion, but Mitta’s film is true in spirit. Although C-M is somewhat adapted from Chagall’s memoirs, it is really more of an adaptation of his paintings (140 of which are incorporated into the film). In many ways it is a throwback fabulist fable or a cinematic exploration of folklore and historical mythology, sort of like Alexey Fedorchenko’s Angels of Revolution and Celestial Wives of the Meadow Mari, but with a stronger narrative drive.

C-M deliberately attempts to render Chagall canvases on the big screen, striving but falling short of a look reminiscent of What Dreams May Come. In fact, the first half of the film suffers from an over reliance on whimsy, but the energy level kicks up appreciably when Malevich finally blows into town. Mitta along with Leonid Bichevin and Anatoliy Beliy, as Chagall and Malevich respectively, capture the intriguing ambiguities to their evolving rivalry. After all, Chagall recruited Malevich for the sake of stylistic diversity and intercedes with Naum on the Suprematist’s behalf at a critical juncture. Yet, Malevich had a far greater understanding of their new masters. (In subsequent real life, Malevich even anticipated he would fall out of favor with Stalin and accordingly took steps to protect his work for posterity.) When not playing off Beliy, Bichevin’s Chagall is basically an exuberant shaggy dog. In contrast, Beliy always conveys a sense of the wheels moving within Malevich’s head. Kristii Schneider is a good likeness of Rosenfeld and brings a refreshingly dry wit to the otherwise loyal and sacrificing wife. Yakov Levda and Nona Buylgina are also quite compelling as Chagall’s ardent followers, even if their subplots remain half-baked.

Frankly, it is rather impressive how Mitta remains true to his idiosyncratic vision throughout C-M. He directly addresses the mounting fear and oppression of the early Soviet state, but the film never feels heavy-handed or didactic. Of course, he has been making films since the 1960s, including the USSR’s first disaster movie, Air Crew, in 1979. Having only sixteen prior directorial credits (per imdb) after navigating the Soviet and Russian film bureaucracies for six decades, one can see how Chagall and Malevich’s stories would resonate for him. Regardless of its rough edges, it is a wistful and wise film, recommended rather fondly for connoisseurs of modern art and Russian cinema when it opens this Friday (6/12) in New York, at the Cinema Village. 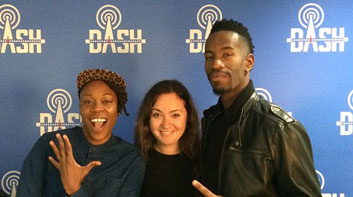 Kristii Schneider on the first launching day of the “bompopradio” show on DJ Skee’s DASH Satellite Radio! “Came early morning to the […] 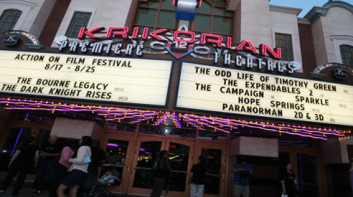 The AOF will be held in August 2017 in California, the festival Features Films In All Genres! Official Website of the festival […] 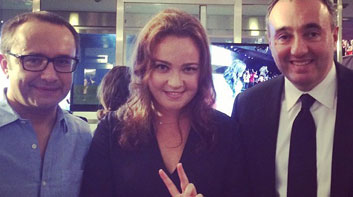 “My congratulations to the Golden Globe winners and just to my dear friends Andrey Zvyagintsev and Alexander Rodnyansky!!! You are wonderful and […] 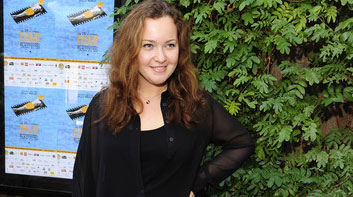